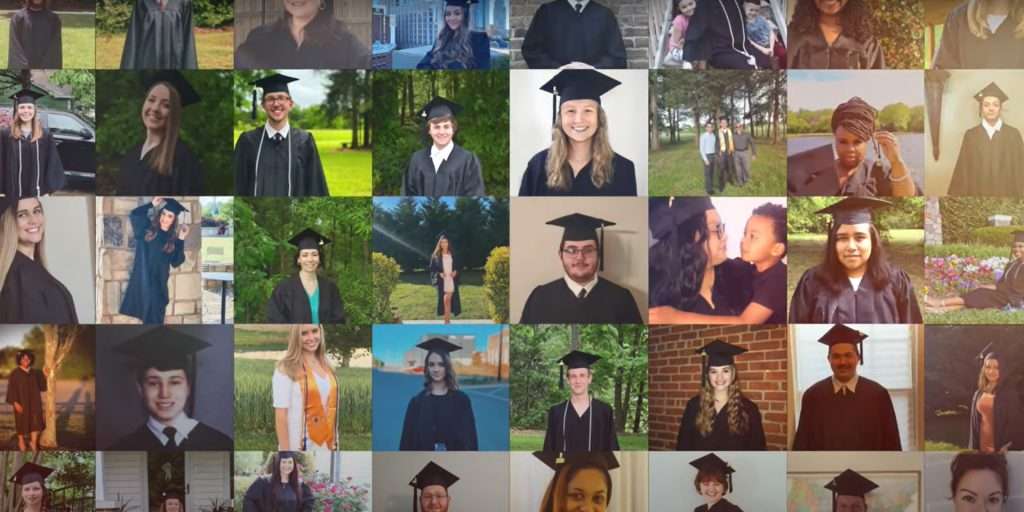 To provide a memorable experience for graduates this year, South Piedmont Community College held a virtual graduation on Thursday, May 14, for 295 students who earned associate degrees. The streaming event on YouTube garnered over 2,000 viewers who celebrated in real time the accomplishments of dedicated graduates.

“As each of you have navigated the changes that have been thrust upon you, you’ve learned to be tolerant, flexible, and patient,” explained Dr. Maria Pharr, president of South Piedmont, “but at the same time you have risen to the challenge just as you have done through your educational journey to reach this point of becoming a college graduate.”

Laura Rebolledo, senior and student government association president, congratulated graduates on the first day of their new lives. She encouraged those who may be continuing their education at a four-year university, starting a new career, or joining the military, to press forward despite any of the current circumstances.

Along with honoring graduates, each year South Piedmont honors an individual who has a positive impact on the college and community. This year, John Hendley was awarded the 2020 Honorary Degree by contributing his time and resources to many across the local area. He previously served on the Board of Trustees at SPCC as well as Wingate University and the Monroe-Union County Economic Development boards.

“It has been a thrill for me to serve South Piedmont,” said Hendley, “it’s good to see the progress the students have made and always good to help people be successful.”

The 2020 Staff of the Year Award was presented to two deserving staff members. Keith Rogers, director of fire and rescue training, was chosen for his impeccable character which has allowed for community partnerships to advance student success. Carl Bishop, vice president of academic affairs, was also honored for his work in removing barriers for students including transfer agreements between South Piedmont and Wingate University.

To view the graduation video visit our YouTube channel at: https://youtu.be/pZD36XZM1Bs