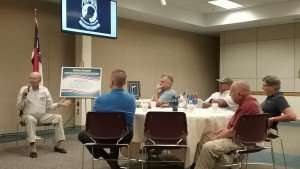 Today, Quincy Collins spoke at the Veterans Coffee House held the third Wednesday of each month at SPCC. Quincy retired from the Air Force as a full Colonel in 1974 a year and a half after spending 7 1/2 years as a POW in prison cells in and around Hanoi. He sang hymns while in the prison cells.

Born on the 4th of July, raised in Concord, NC, Quincy graduated from The Citadel in 1953 with a Bachelor of Science Degree. Immediately after Quincy entered the Air Force as a 2nd Lt, his illustrious Air Force career included opening the Air Force Academy in 1955 as an Air Training Officer, Aide to the Four Star Commander-In-Chief of US Air FOrces in Europe, to being shot dow by the North Vietnamese Communist and spending 7 1/2 years as a POW in prison cells in and around Hanoi.

Below is a link to a video of the POW Hymn Quincy Collins wrote and sang.