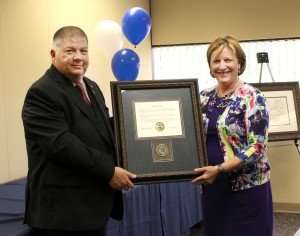 Kevin Ashley, SPCC’s Basic Law Enforcement Training (BLET) director, who recently announced his retirement, was honored on Thursday for his 28+ years of exemplary service. In the photo, Ashley is presented a proclamation from the South Piedmont Community College Board of Trustees by Vice President for Academic Affairs Joyce Long. Many of the law enforcement officers in Union County, Anson County and the state were trained in Ashley’s program—around 450 graduates in all. Ashley has built a strong program that is greatly respected by law enforcement agencies throughout the state. In fact, SPCC’s BLET program was recognized at the 2015 Law Enforcement School Directors Conference as one of only six programs in North Carolina to exceed the 95 percent success rate on the State Exam—making it the number one program of its kind in the region and well-positioned for future success.