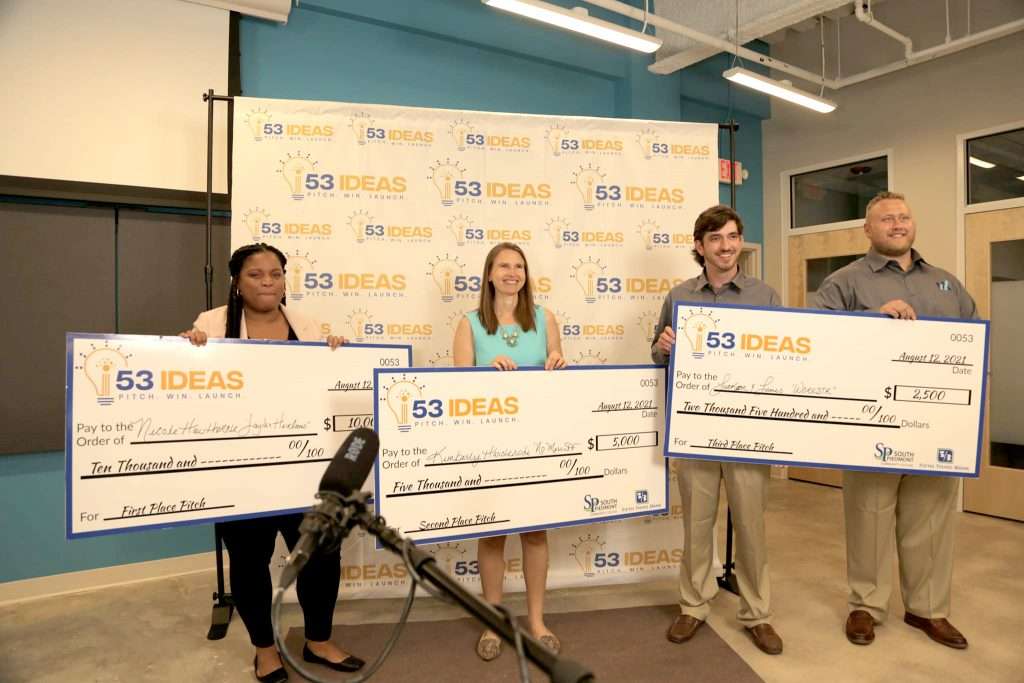 South Piedmont Community College’s Small Business Center led the 2021 53 Ideas Pitch Competition supported by Fifth Third Bank this summer. The competition attracted more than 125 entries from across the 10-county region. The majority of entries were from women (64%) and nearly three-fourths (74%) were from minority groups.

The broad field was narrowed down to the top 10 finalists who participated in a live pitch on August 12. Amid spirited presentations and friendly competition, judges selected the top 3 winners who earned cash prizes to support their winning business venture.

First place ($10,000) was awarded to Nicole Hawthorne to help seed her company, Jayla’s Heirlooms, a business that makes culturally diverse heirloom dolls by hand. Second place ($5,000) was awarded to Kim Harcelrode for her No Mess SPF product. Third place ($2,500) was awarded to Jackson Sippe and James Wheeler for creating an app that will help businesses communicate and pay contracted workers.

While winning businesses represented the diversity of great ideas, they all shared one thing in common. When asked individually what gave action to their ideas, they each said, “frustration!”

Here are their stories: 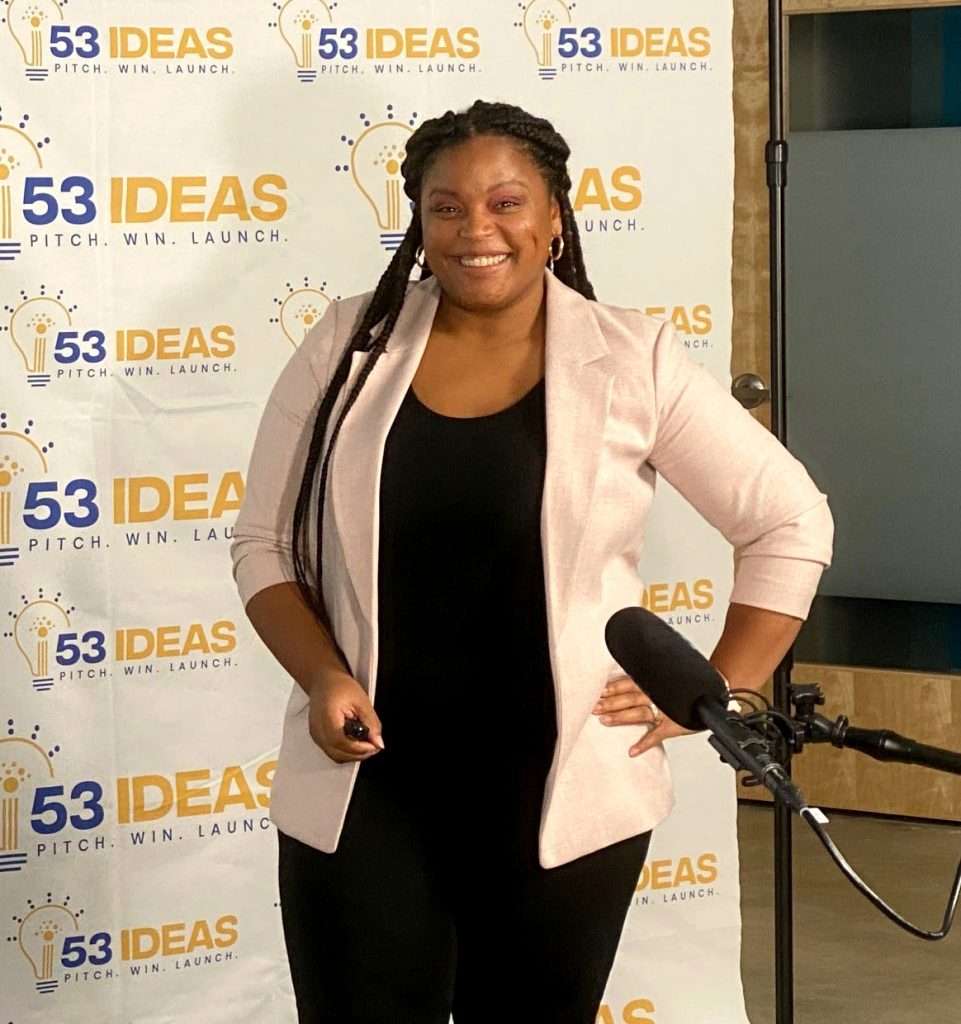 After Nicole’s daughter, Jayla, was born, she tried to find dolls that looked like her. Being of Puerto Rican and African-American descent, there was nothing in the market that represented her culture. She was frustrated that she could only find dolls that were plastic and mass produced.

“Unfortunately, the options available were limited with only two colors,” said Nicole. “When I wasn’t able to find anything that represented our culture, that was it! I had to do something about it.”

Not knowing how to sew, Nicole reached out to women around the world for help.

“We are an internationally diverse world, and this is the lens I wanted to bring to the business,” explained Nicole.

Being the curator of the dolls, Nicole wanted something that could last, represent heritage, and be a keepsake for future generations by crafting the dolls using sustainable material. Each doll is made of fabric and is as unique as the culturally diverse women who hand-make them.

Hand-making dolls is a slow process, and the money she received from Fifth Third Bank’s competition will help her discover new ways to streamline her process without sacrificing the dolls’ unique qualities.

Nicole plans to develop new collections and a mobile app where others can create dolls representing their culture’s unique attributes.

Although her idea won the competition, Nicole believes her business background and the coaching webinars provided by the South Piedmont Small Business Center helped her take a new look at her business plan and streamline the pitch.

New collections from Jayla’s Heirlooms will be on Amazon through their Black Business Accelerator program before Christmas and can also be found on her website at www.jaylasheirlooms.com. 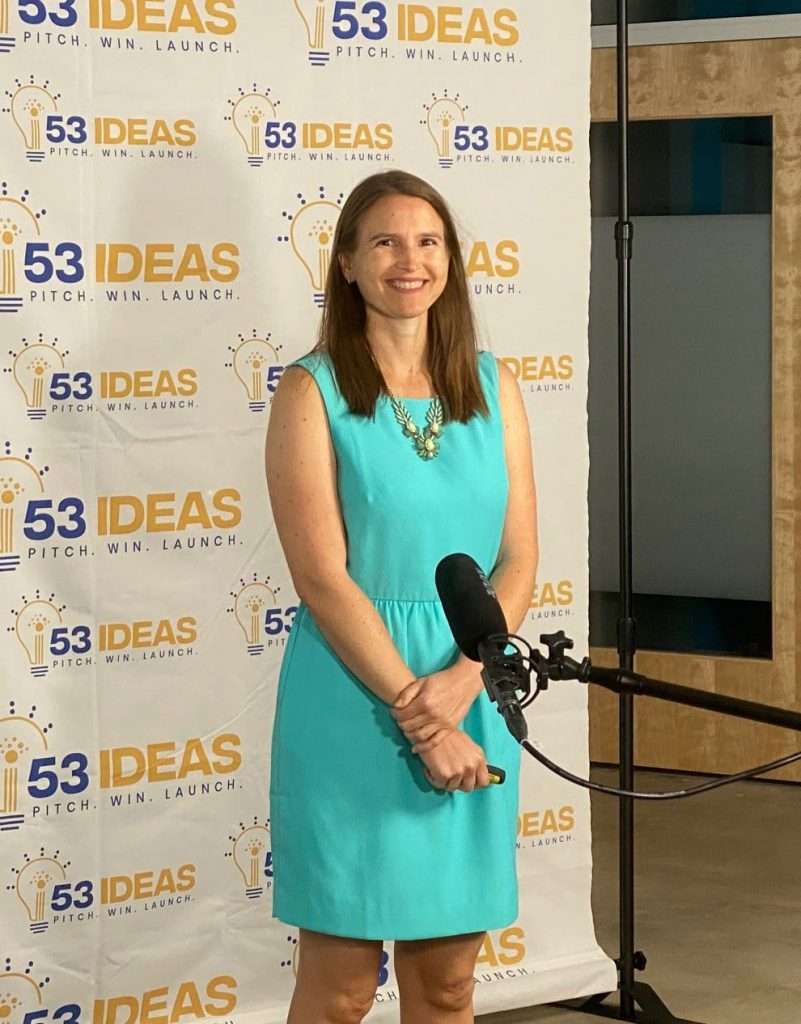 Kim applied for the 53 Pitch Ideas competition last year and did not make it past the first round. This year, she entered and won second place with her No Mess SPF.

“I attended all of the webinars and found a ton of value in asking questions and looking at things from scratch,” said Kim.

Getting to this point took hard work and dedication.

“You reach out, call people, and you get a lot of noes,” explained Kim. “There are a million reasons to give up, but I have to remind myself why I’m doing this.”

The reason for her is personal. Both Kim and her dad have struggled with skin cancer their whole adult lives. After doing some research, she found out that human error and lack of application of sunscreen is the culprit. Kim wanted to create a system that could guarantee good coverage.

Working with an engineer friend, Kim developed a tower for adults and kids that houses three height adjustable nozzles to spray sunscreen from the neck down.

Kim is partnering with five local community pools to place her No Mess SPF. The large device will serve as a visual reminder to use sunscreen as visitors enter the pool area. According to her, users will not need help to cover those hard-to-reach spots, because the machine will do it for them.

Kim is continuing to tweak her device and is looking to partner with a sunscreen company that uses natural ingredients. Part of her future goals will also be to educate people about the risk of sun damage and the importance of sunscreen. 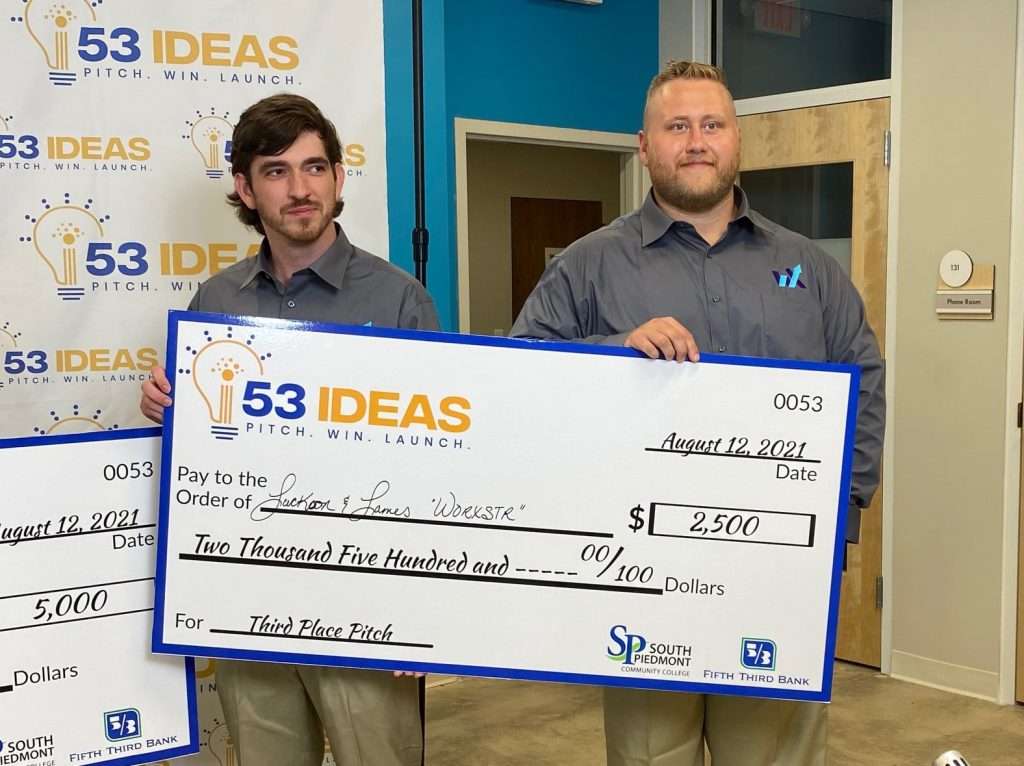 This experience of being stiffed for doing contracted work led James to believe there had to be a better way. After exhaustive research, he found out there wasn’t.

According to James, it can be difficult to manage contracted workers since they work for themselves and often set their own schedules. Scheduling workers, planning work, and payment can all be a hassle. Together James and Jackson developed a web platform that can help contractors and those who hire them.

“Being able to network throughout the competition and gain resources was very helpful,” said Jackson.

The next step for Worxstr will be developing a mobile app. According to Jackson, their plan was about $2,400 short until they won the competition. Their winnings will help fill that gap.