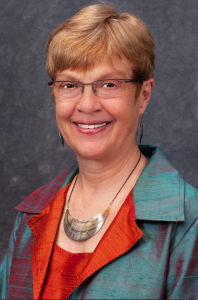 Our first speaker in the Civil Discourse Series is Dr. Carolyn Lukensmeyer.

Dr. Carolyn J. Lukensmeyer is the Executive Director of the National Institute for Civil Discourse, an organization that works to reduce political dysfunction and incivility in our political system. As a leader in the field of deliberative democracy, she works to restore our democracy to reflect the intended vision of our founding fathers.

Dr. Lukensmeyer previously served as Founder and President of AmericaSpeaks, an award-winning nonprofit organization that promoted nonpartisan initiatives to engage citizens and leaders through the development of innovative public policy tools and strategies.

During her tenure, AmericaSpeaks engaged more than 200,000 people and hosted events across all 50 states and throughout the world. Dr. Lukensmeyer formerly served as Consultant to the White House Chief of Staff from 1993-94 and on the National Performance Review where she steered internal management and oversaw government-wide reforms. She was the Chief of Staff to Ohio Governor Richard F. Celeste from 1986-91, becoming the first woman to serve in this capacity. She earned her PhD in Organizational Behavior from Case Western Reserve University and has completed postgraduate training at the Gestalt Institute of Cleveland.

Dr. Lukensmeyer will be introduced at this event by Rep. Craig Horn, now in his fourth term in the North Carolina General Assembly representing District 68, Union County. Representative Horn’s work in education has resulted in him being dubbed the “Education Legislator” by EdNC, the popular blog that covers education policy across North Carolina. In addition to his renown as an advocate for quality education, he is also respected for his civil engagement and for his long history of national, statewide, and local service.